Meet Minneapolis, Minnesota based up and coming spoken word artist and performer, Kara Marell. After cutting her teeth at local open mic nights six short months ago, she has since taken the Minnesota literary scene by storm. Kara’s debut book of poems, Karma Vet, is due out Summer 2020 on The Quail Press and Anarcho Welfare Press. Additionally, she was just published in issue #81 of the prestigious literary journal, The Hiram College Poetry Review, which played an important role in establishing the career of Charles Bukowski in the late ‘60s. She has built a name for herself headlining shows and collaborating with musicians and bands at the Warming House, Modus Locus, Mortimer’s, Honey, E’s Emporium,  Chatter Box Pub, moto-i, Rogue Buddha Art Gallery, The Root Note (La Crosse). Kara’s performances have been described as emotionally resonating, relatable, funny and vulnerable. Folks have shared that Kara's words have truly touched their lives, and that she is reviving beat poetry in Minnesota. 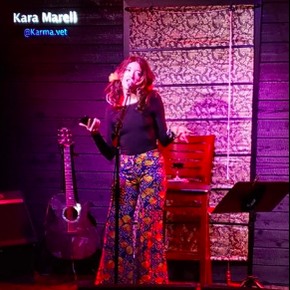